Colts Training Camp: Fun for All 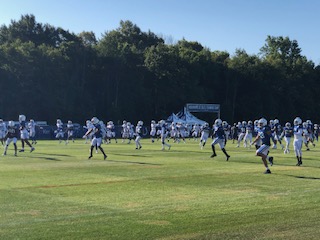 Colts Training Camp: Fun for All

Summer is typically associated with baseball, but the rising popularity of football has left many people yearning for the end of July, and the beginning of training camp for each NFL team. The Indianapolis Colts hold their training camp at Grand Park in Westfield, which is a great location compared to the locations of Anderson and Terre Haute in past seasons. This change to Westfield allows many of its fans in the Indianapolis area an opportunity to get up close and personal with their favorite players. Fans get to watch the Colts practice and get that taste of football that many of them have been longing for since January. After practice Tuesday, many young fans lined the fence in anticipation of getting autographs from their gridiron heroes.

The fans weren’t the only ones enjoying practice Tuesday, some of the Colts players were enjoying the moment as well. Many players were dancing while the music played during their stretching lines at the beginning of practice. Early in practice during a special teams session, newly signed Colts receiver Devin Funchess played catch with some young fans in the stands. Later on during a short break in practice, Coach Frank Reich had the music turned up and a dance off ensued between Funchess and linebacker Darius Leonard. Funchess also endeared himself to his new teammates at a couple moments during practice, when he raced down the field to celebrate with teammates who scored a touchdown. After practice, many players obliged fans by signing autographs and taking pictures with them. It was evident that this was an enjoyable experience from both sides.