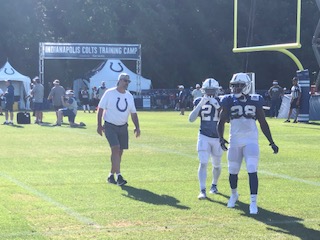 Depth: It is very important to develop those players who may have to step up throughout the year due to injuries. In camp, there are over 90 players, so selection of final roster and developing the reserves is very important.

Fundamentals and technique: Professional players spend a lot of time in camp in individual periods. The high reps of the fundamentals is very important. Offensive Co-ordinator Nick Sirianni believes that the focus on fundamentals has raised their level of play

Matchups- Defensive Co-ordinator Matt Eberflus stated after practice that he was and is concerned with evaluating certain matchups in camp. Seems that they will script activities in 1/1 and other drills for evaluation. “Unit chemistry will come as camp progresses,” stated Eberflus

An organization approach is needed. Meaning that there are many personnel on the coaching/support staffs that make a professional football team successful. I was admiring the guys whose job was to catch passes in the flat during quarterback drills.

“I got after them,” Coach Sirianni said to the media. He was referring to a recent practice. The takeaway is that motivation and accountability are very important. Sometimes it takes a little intensity