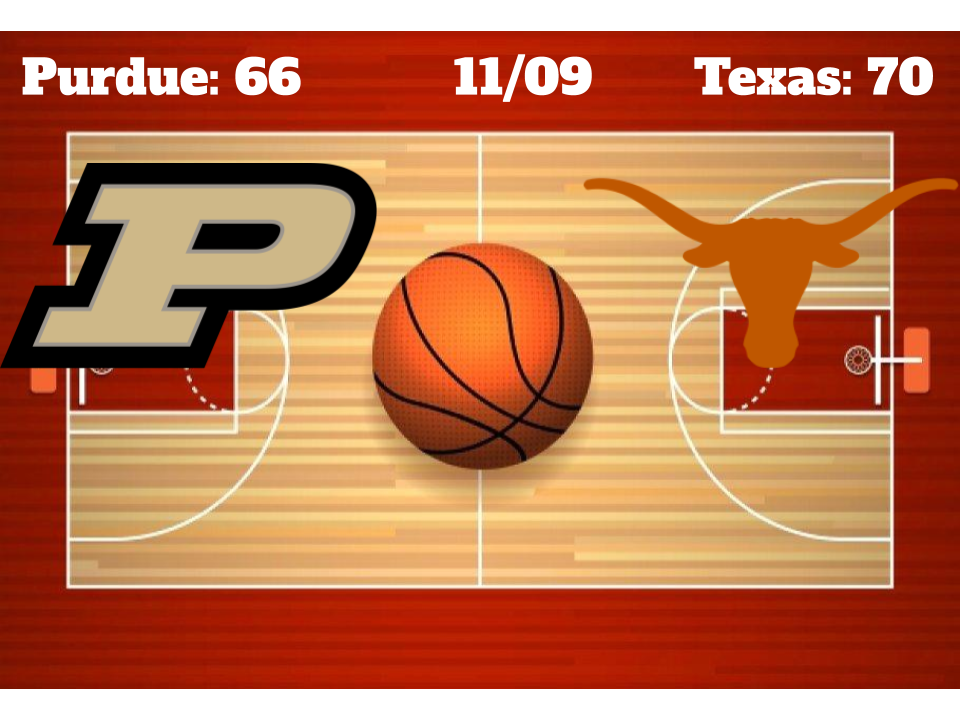 After fighting their way to the Elite Eight last season, the 2019-2020 Boilermakers debuted on Wednesday night with a blowout 79-57 win over Green Bay at home. With Carson Edwards’ departure for the NBA during the offseason, senior transfer Jahaad Proctor appeared ready to fill the gap, grabbing 5 rebounds to accompany his team-high 26 points. Being 23 point underdogs, Green Bay was projected to be a cakewalk; however, that mismatch is one of a rare few for Purdue. With games against reigning-champion Virginia, #25 VCU, and Butler’s prestigious squad, Purdue’s non-conference schedule is anything but easy, and the difficult string of games started when Texas traveled to West Lafayette on Saturday.

In front of an ecstatic, sold-out crowd, Texas won the tip to start a highly contested, back-and-forth game. The Longhorns started hot, getting out to a quick 10-3 lead on two 3s by junior Matt Coleman III. Purdue guard Sasha Stefanovic responded, coming off the bench and lighting up Mackey Arena with four 3 pointers within five minutes. After a two-minute scoring drought by both teams, a Coleman-led offensive for Texas was nullified by Purdue’s inside shooting game. The Boilermakers led the Longhorns 34-31 at the half.

Both teams continued where they left off in the first half, pacing each other in scoring and limiting the point differential to 6 points for the rest of the game. When Purdue was up 44-38 with 14:53 left in the second half, Texas came right back by stopping the Boilermaker offense and hitting two key shots to bring the deficit back to 1. This contention continued, with both teams trading baskets and keeping the score close. With 3:14 left to play, Purdue’s Eric Hunter Jr. hit a pair of free throws, putting Purdue up 62-57 and giving his team a golden opportunity to put the game away. Instead, Texas went on a 7-0 run, highlighted by Coleman’s 3 assists and a dunk by Jericho Sims. Purdue’s fouls also piled up, putting Texas in the bonus and double bonus as the decisive possessions took place. Up 64-62, Texas’ Andrew Jones, who fought Leukemia all of last season, hit two free throws, setting the precedent for Texas’ clutch shooting at the line, as their 6/6 shooting gave them the boost they needed to beat the Purdue Boilermakers 70-66.

Looking forward, Purdue will look to keep up their dominance in the rebounding category, as they outrebounded Texas 36-24. Texas coach Shaka Smart commented, “That was all them,” indicating that Purdue’s ability to outrebound opponents might carry on throughout the year and generate some much-needed second-chance points. Purdue will also look to increase their shooting percentage, as a large part of tonight’s loss can be attributed to their dismal 38% shooting percentage within the arc. Purdue will play again on Wednesday when they travel to Wisconsin to play Marquette on the road.