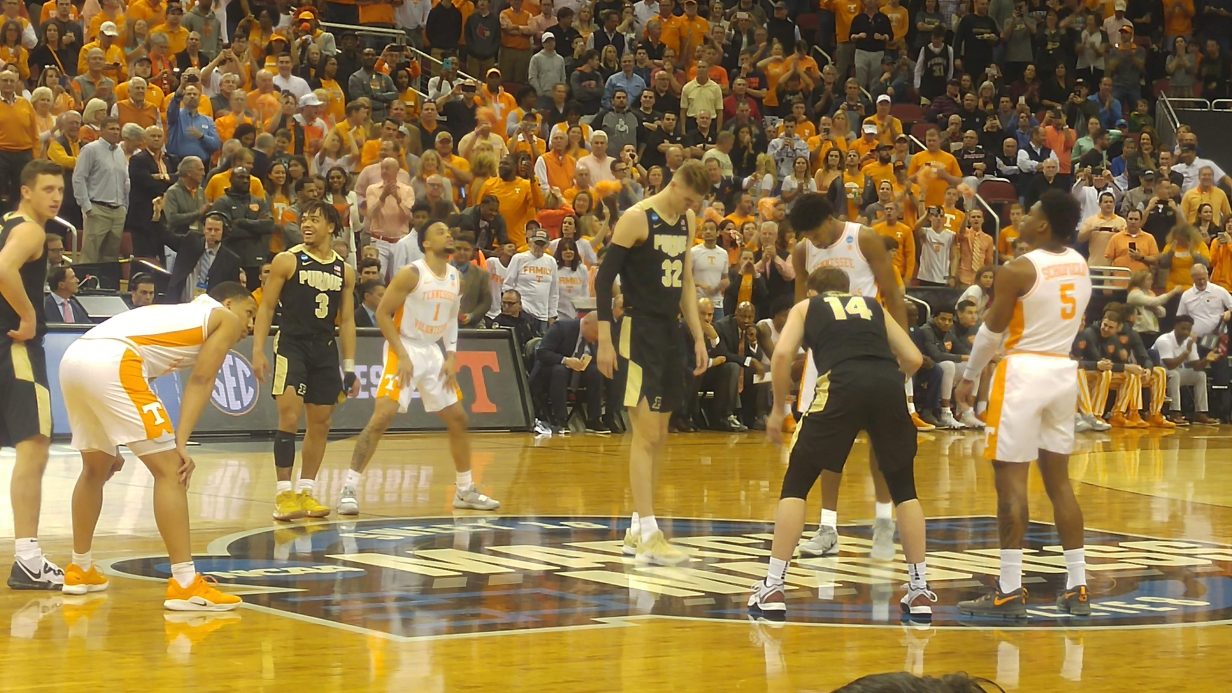 The South Regional boasted #3 Purdue and #2 Tennessee playing in the Sweet 16. The game was hosted in Louisville, so both fan bases could travel well to the game. The Boilermakers and Volunteers had both taken care of business up to this point into the tournament. Each side has experience, with talent to go with it.
The start of the game featured both teams looking to take control of the game early. Tennessee’s Jordan Bone hit a trifecta to start the game off, and Tennessee matched with a basket and thunderous dunk by Nojel Eastern. The game was evenly matched in its first minutes as Purdue led 9-7 at the 16:00 mark. Trevion Williams came off the bench for Purdue to almost immediately get three offensive rebounds and two baskets. Both of these teams picked up the point guard full court in an effort to slow the game down.

Aaron Wheeler entered the game for the Boilers and hit an open three to extend Purdue’s lead to 21-13. Admiral Schofield attempted to answer with a dunk, which he ultimately missed, and that led to a dunk by Wheeler. At that point, the tides were not in Tennessee’s favor. Grant Williams helped calm down fans of the Volunteers with a basket and the foul soon after. Jordan Bowden helped Tennessee stay in the game by making three three-pointers in the first half. At the end of the half, Purdue led by a score of 40-28.

The first half of the game had a considerable amount of storylines attached to it. Purdue has shooting 55.2% from the field, while their counterparts shot 35.7%. Admiral Schofield, one of Tennessee’s top players, had one point before he headed to the locker room at half. On the other hand, Carsen Edwards was scorching hot the entire time he was on the court, making 4-9 of his three point attempts. The charity strip was not kind to either team as Purdue went 1-5 (20%) and Tennessee went 4-13 (30.8%). Purdue was in major foul trouble with five players having two fouls at halftime.

Purdue and Tennessee both came out firing in the second half, trying to reach the Elite Eight. Ryan Cline and Admiral Schofield made it apparent early that they were going to be catalysts for their teams in the second half. Purdue proceeded to go on a 8-0 run to further their already big lead. Purdue’s biggest lead of the game came at the 16:19 mark, in which they led Tennessee by 18 points. At that point, the Volunteers were not looking good, but their crowd kept on cheering them on.

On Wednesday, Coach Matt Painter of Purdue,stated, “Tennessee is going to have runs
in a game, they have huge runs in games. You have to be able to limit those runs. That’s hard to do.”

During the game, Jordan Bowden drained a three, and drew a foul to make a four point play. The play helped spark a run for Tennessee in which they scored 13 straight points, while keeping Purdue scoreless for nearly four minutes. Tennessee was rolling and they capitalized on the energy in the arena to tie up the lead with 6:07 left in regulation. Schofield proceeded to hit a three that brought Tennessee their first lead since early in the first half. Down the stretch, Schofield and Cline continued to trade blows. Cline was able to tie the game up at 0:37, much to the relief of the Purdue fans in the arena. Purdue forced Tennessee into taking a bad shot, but left Grant Williams an open lane for a rebound. The hammered down a put back dunk to but the Vols up by two with eight seconds left. Edwards attempted to drive on the Volunteers, but ended up having the ball knocked away. Purdue in bounded the ball to him and he took a three for the lead in the final moments of the game. The ball missed the target, but there was a whistle blown on the shot, giving him three free throws and a chance to put his team up with less than two seconds left. Edwards missed the first, but made the last two to tie the game up and head it to overtime.

Purdue got out to a quick start during overtime and they would not look back. Ryan Cline fouled out at 2:00, and he had to watch the rest of the game from the bench. Purdue would go on to finish the game without his presence on the floor. The final score was 99 to 94 with Purdue advancing to the Elite Eight.

Carsen Edwards was the high scorer of the night with 29 points. Ryan CLine was a close second with 27 on 7-10 three point shooting. Williams and Schofield both had 21 points for Tennessee. Purdue ended with a 48.5% free throw percentage, while Tennessee ended with a 50%. The game certainly lived up to the hype surrounding March Madness, with the game having many ups and downs for both teams. In the end, there can only be one winner and Purdue punched their way into the next round.