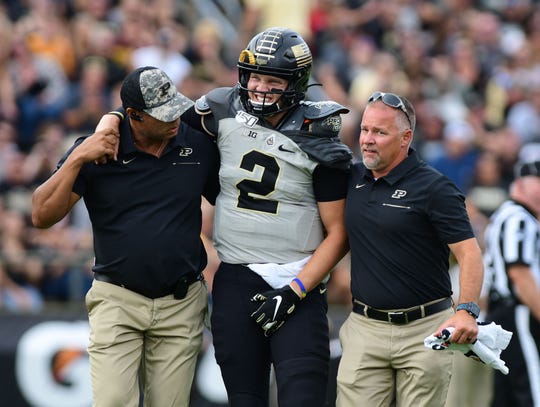 On one play, with just over 3 minutes left in the 1st quarter, the trajectory of Purdue’s season may have drastically changed. One play, and the two most important weapons for the Boilermaker offense were lost indefinitely, and perhaps for the season. 5th year senior quarterback, Elijah Sindelar, returning from a concussion suffered on September 7 versus Vanderbilt, was sacked and his shoulder was driven into the ground by Tai’yon Devers. Sindelar laid on the ground writhing in pain, but meanwhile twenty yards up field, the heart of Purdue’s offense, superstar receiver, Rondale Moore was also down holding his knee. Moore’s knee had hyperextended and buckled in awkward fashion in a non-contact play while trying to make a cut upfield. Moore tried to get up at first, but immediately fell to the ground in extreme pain. He was then unable to put any weight on his leg and carried to the sidelines. After spending 20 minutes in the medical tent, Moore was then carted Purdue’s locker room where Sindelar had been taken immediately after the doomsday play of the season. Sindelar eventually returned to the Purdue sidelines in street clothes and his shoulder in a sling.

As of now, the details of Sindelar and Moore’s injuries are still unknown. Jeff Brohm was particularly cloudy in his response to the question of his stars health. Brohm simply stated, “Elijah, I’m not sure about. Probably not good. And Rondale, I’m not sure about.” While Brohm’s comments might lend a sliver of hope, the images of the injuries and the expressions of the players faces left Purdue fans discouraged. What was an injury bug for the Boilermakers has now become a team infirmary. Purdue has now lost not only its two best offensive players in Sindelar and Moore, but also its two best defensive players, safety Markus Bailey (out for season, knee), and DT Lorenzo Neal who is still not close to returning from his torn ACL suffered last year in the Bucket Game. To add insult to injury, starting offensive tackle, DJ Washington was also carted off with a lower left leg injury.

While the events of the day may have crushed Purdue’s hope for this season, there may be a silver lining in that the future of Purdue’s offense will now get their opportunity and valuable experience now. Out of the heap of injuries, Purdue may have discovered its running game in true freshman, King Doerue. Doerue was a relative unknown prior to this game, but after a surprise start he made an impressive debut with 20 carries for 94 yards and 2 TD’s. Doerue also added 4 catches for 32 yards and another score. Freshman David Bell was able to show what he could as a number one receiver, catching 8 balls for 114 yards. Redshirt freshman quarterback Jack Plummer was vastly improved from last week, going 23-41 for 245 yards, 2 TD’s and 2 int’s. Under the adversity, the Purdue offense didn’t crumple and actually led an impressive 4th quarter comeback. Going into the 4th quarter down 38-17, the offense rallied back to cut the final score to 38-31. Had it now been for Purdue’s defense being unable to get a stop in the final two minutes, Purdue might have even had a shot to tie or win the game.

Assuming that Sindelar and Moore won’t be back for the foreseeable future, this is the new look of the Purdue’s skill positions who will be forced to perform NOW:

It might have to get uglier before it gets better with this new young crew forced into action against a tough upcoming schedule that includes Penn State, Maryland, Iowa, Nebraska, Northwestern, and Wisconsin. However, the adversity might help the Boilermakers grow and make them even better for future seasons. Only time will tell.