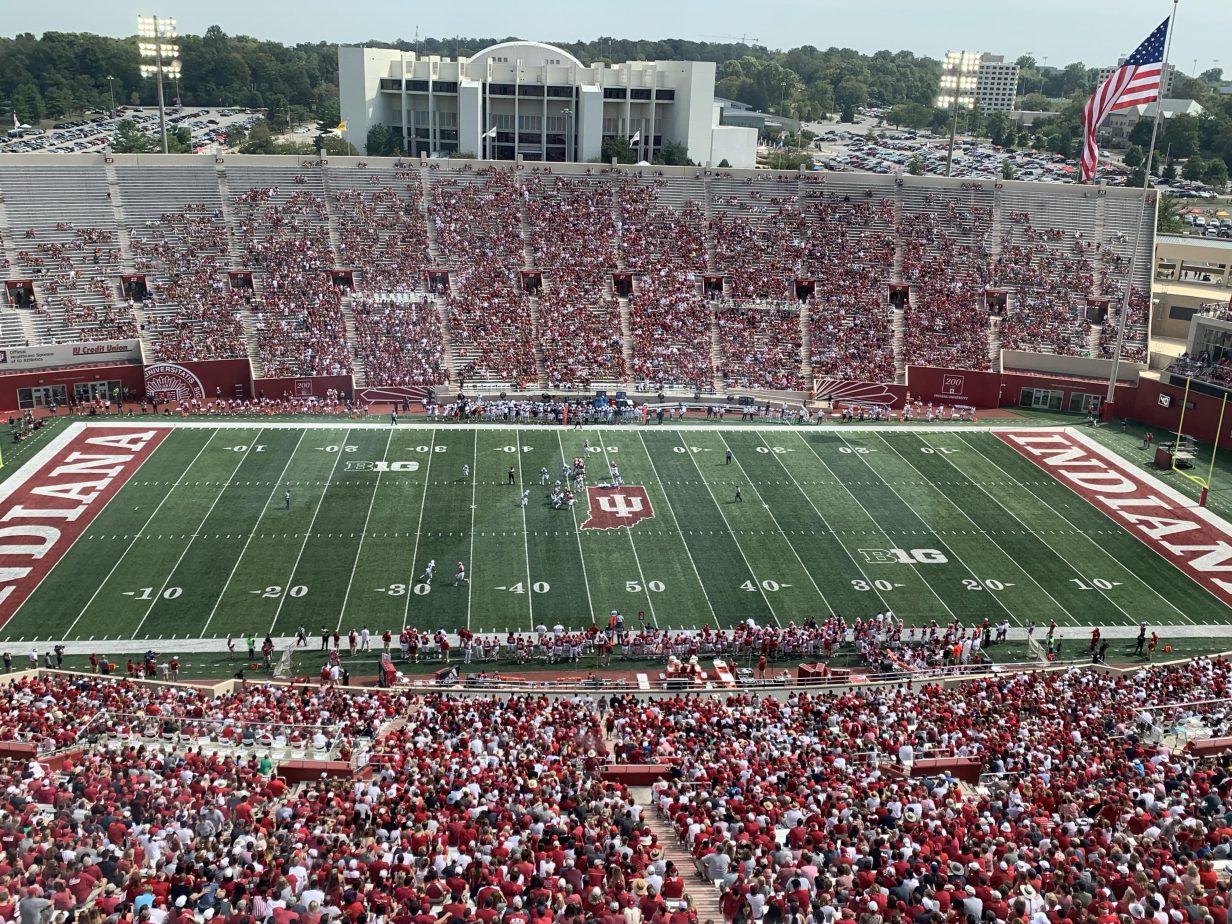 My first media experience covering an Indiana football game at Memorial Stadium was a fun one, albeit a little underwhelming with the product on the field. The UConn Huskies came to Bloomington and showed us why they are considered just a basketball school. Their product on the football field, particularly on offense, left a lot to be desired. Even against a middle-to-low tier Big Ten team in the Hoosiers, UConn was completely outmatched in talent, coaching, and execution all day long. Indiana back-up quarterback, Peyton Ramsey, making his second start this season in place of injured starter Michael Penix Jr., looked more like Peyton Manning than Peyton Ramsey in this one. Against the Huskies, Ramsey was able to put together an efficient performance, going 23 for 27, 247 yards, 3 TD’s and 1 interception.  Ramsey had the offense in control all day, cruising to an easy 38-3 victory.

Indiana dominated every statistical category in this game, and some of them were staggering. Offensively the Hoosiers outgained the Huskies 430 to a meager 145 total yards. First downs: 25 to 9. Yards per pass: 9 to 3.1. There simply wasn’t one statistical category that Indiana didn’t win handily.

Overall, UConn couldn’t muster any kind of rhythm all day long. Their continual 3-and-out offensive possessions left this game lacking much excitement and competitiveness. As for Indiana, after an opening drive resulting in a fumble, the offense was able to put some productive touchdown drives of 9, 10 and 12 plays during the day. There were not any jaw-dropping offensive plays during the day for the Hoosiers, just efficiency, efficiency, and more efficiency. The most exciting play of the game, however, occurred on the defensive side when in the 3rd quarter when Cam Jones grabbed an errant under-pressure throw-away pass from UConn quarterback, Jack Zeriotis, and scampered untouched 44 yards for a pick-six.

Despite the highly efficient game from the Hoosiers, it didn’t come without a heavy cost. Starting left tackle, and Lafayette native, Coy Cronk, was lost with a gruesome leg injury in the first quarter. Replay showed that Cronk’s foot was facing the wrong direction. The medical crew immediately came out with a cart and air cast and the Cronk’s teammates all came out to their teammates’ side to show their support. Head coach, Tom Allen, said after the game that the extent of Cronk’s injury was still unknown but that it “doesn’t look good.”

Indiana’s offensive line will not have much time to adjust to the loss of Cronk as they face a daunting defensive line at Michigan State next week. The Spartans defensive line is the strength of their team and will give the Hoosiers one of their toughest challenges of the season. It will be nothing like what they faced Saturday versus UConn. Indiana can celebrate this week with an easy and impressive win, but the grind of the Big Ten quickly is now here at their doorstep.