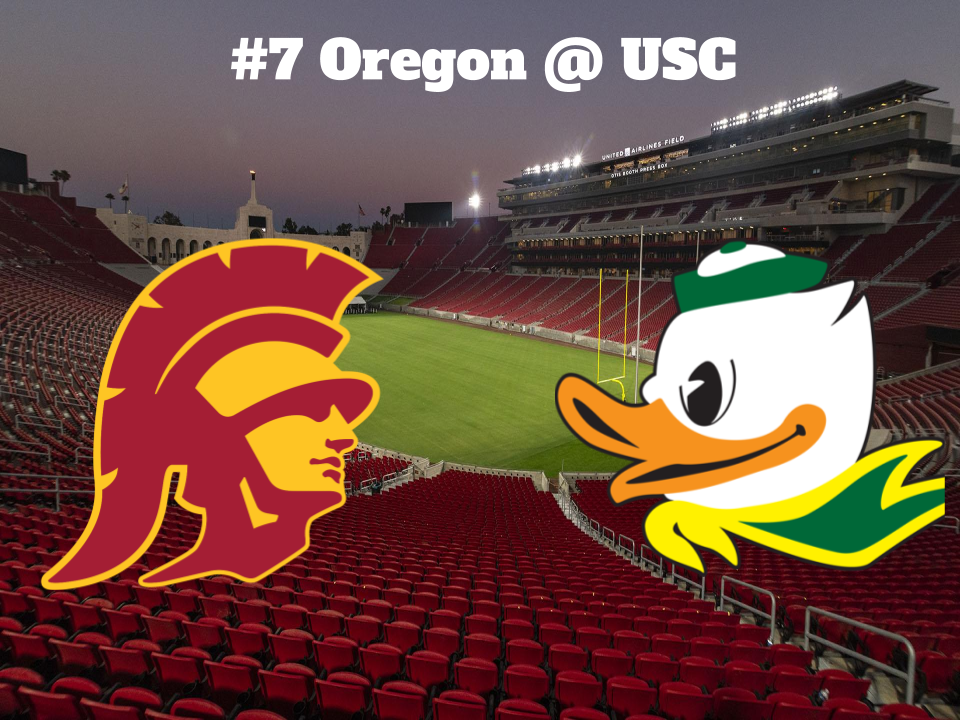 As the calendar turns to November, we are starting on the last stretch of the season. It has already become evident which teams are in contention for conference championships, which teams are in contention for a bowl game, and which teams will make headlines if they simply pull off a win. As the Pac-12 has taken form, there is one clear, intriguing storyline: the USC Trojans might just beat out #9 Utah to earn the opportunity to play #7 Oregon for the conference championship. So, with this heavy-hitting matchup between the Ducks and the Trojans this Saturday night, we might also be seeing a preview of the Pac-12 title game.

Oregon lost its home opener by a slim margin against a very good Auburn team back in August. Since then, they have gone 7-0 and lead the Pac-12 North by 3 games. This success can largely be attributed to Justin Herbert, who has thrown only one interception in 262 passing attempts this season. Herbert’s vision has picked apart defenses, whose audibles to defend against the passing attack has left them defenseless against the rushing game, which has accrued 1521 yards on the year. On the defensive side, the Ducks have only allowed 101 rushing yards per game, which has forced opposing offenses to go to the air. This had led to Oregon’s nation-leading total of 14 interceptions. Oregon’s defense isn’t enough to beat USC alone, but the offensive firepower of this team should give them the upper hand.

USC’s offensive plan was derailed when QB JT Daniels was hurt in their win over Fresno State. Daniels was supposed to be the foundation upon which USC was going to build a great season; however, freshman QB Kedon Slovis has stepped up and led this team to a 5-3 record, including wins over Stanford and Utah. He leads a mid-range passing attack that spreads throws out primarily among three receivers, all of whom have shined when they needed to. As for their defense, a strong second and third level has kept them in games when their run defense has failed. Overall, USC’s success has come from doing the bare minimum to win. They tend to get early deficits and then score big in the second half, which has led to minuscule margins of victory. Nevertheless, this team tends to shine in big moments, so expect a strong outing from the passing game.

This game has big implications for the Pac-12 South. USC and Utah are tied for first right now, with USC owning the tie-breaker. However, a loss this weekend could put Utah on top for good, as Utah is heavily favored in the rest of their games. The game will be played at the Coliseum in Los Angeles at 8 pm EST and will be aired on FOX.